Hi everyone,
We are currently in position 46 21N 007 23W, sailing at 4 knots on a course of 190M.  The wind is 6-10 knots from the ENE.  There's scattered high-level cloud with the sun mostly shining.  The air temperature is 13C and the water 14C.
Since yesterday afternoon we've been "off soundings" (beyond the continental shelf).  Feels like ocean sailing when the depth sounder can't see the bottom.  Always reminds me of Pete Goss's classic statement along the lines of 'no matter how bad the situation there's land only a mile or two away - straight down'! 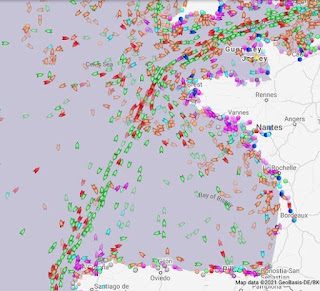 MarineTraffic view showing Ushant-Finistere traffic
We sailed for about 6 hours yesterday afternoon/evening before the wind died again.  While sailing we approached the Ushant - Finistere shipping lane.  Unfortunately there was an oil rig under (very long) tow by tugs right in our path and at the same speed, plus a series of higher speed cargo vessels streaming past.  So we gybed and headed west for a while.  Later in the evening we gybed back before the wind died and the motor came on again.
Last night we were treated to a spectacular display of bioluminecence in our wake.  It extended at least a boat length behind us with a lovely green glow overlaid with intense green spots.  Meanwhile overhead the starscape was magnificent, including a couple of satellite sightings. 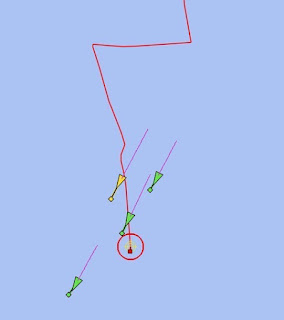 Dodging Traffic
As our tack above shows, we aligned ourselves with traffic to let them pass.  Strange how traffic so often appears in widely separated groups.  'Births of a feather' perhaps.  We're now almost across the lane which is clearly differentiated into Finistere-bound traffic to the NW and Ushant traffic to the SE.  It is a good 15nm across, and with our oblique course it took all night to get across.
We resumed sailing half an hour ago.  Looking forward to the wind settling in from the E for at least the next 24 hours.
Trust all's well where you are.
Posted by Mike Reynolds at 18:51 No comments:

Hi everyone,
We are currently in position 47 44N 007 16W, motoring at 5 knots on a course of 185M.  The wind is 4-6 knots from the ESE.  There's broken mid and high-level cloud with the sun shining at times.  The air temperature is 12C and the water 13C.  Might not need the thermals and onesie tonight!
We sailed all last night, wending our way SW initially and then gradually S as the wind backed.  We even saw a few stars in between the occasional drizzle.  By mid-morning the batteries needed a charge so the engine went on.  And then the sea slowly glassed out as the wind died.  The batteries look like getting a very good charge. 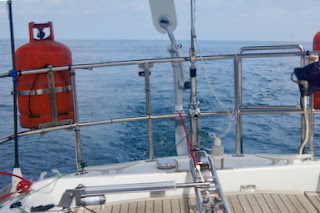 Motoring
The new E wind is supposed to appear this evening.  With a little luck we'll be sailing again before then.  Once the easterly comes in it should hold all the way to A Coruna.
The light conditions are certainly giving us a pleasant passage.  We're keeping up with PredictWind's routing despite their advising us to motor more than we have.  Good to see the polars we refined on our way to the UK are working. 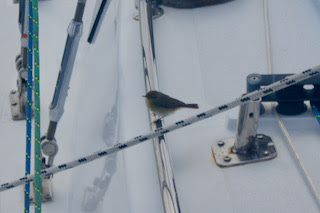 Passenger!
We spent last night dodging traffic but their density decreased from always having someone in sight to rarely having anyone in sight.  Our strategy of keeping well west of the Ushant to Finistere traffic appears to be working.  We plan to cross the lane when we have a decent sailing breeze for better speed and manoeuvrability.
Trust all's well where you are!
Posted by Mike Reynolds at 20:18 No comments:

Hi everyone,
We are currently in position 49 03N 006 24W, sailing at 3 knots on a course of 245M.  The wind is 8-10 knots from the south.  There's mid-level overcast cloud with the sun almost breaking through at times.  The air temperature is 10C and the water 12C.  We're getting 8 amps from the solar panels despite the cloud. 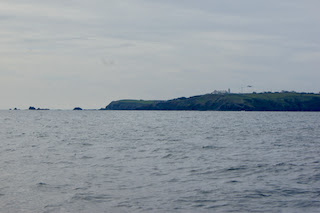 Passing the Lizard
We're amazed we haven't had to motor.  The winds have varied between 6 and 12 knots, and from SSW to ESE.  Pretty much in line with the GRIB forecasts.  We're impressed at Zen Again's performance given her cruising main is cut to the size of one reef point and her new yankee is smaller than the old. 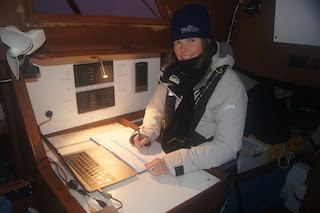 Keeping the Log (and keeping warm)
The sunrise this morning was spectacular.  Blood red seeping through breaks in the cloud.  We have a photo but not yet on this machine.
We're deliberately keeping away from the many cargo ships running between Ushant and Finistere.  We spent last night dodging small groups of fishing vessels and cargo ships moving at up to 20 knots.  For some reason the AIS range was very low, vice its range yesterday afternoon and this morning.  An atmospheric ducting phenomenon perhaps.  It certainly made the night more interesting with old-fashioned Mk 1 eyeball identification of traffic.
We expect the light winds to persist for another day before a new easterly breeze arrives.  It won't be much stronger but it should be steadier.  And perhaps the cloud will start to clear.
Trust all's well where you are!
Posted by Mike Reynolds at 19:18 No comments: