We've been busy recently finishing our preparations to resume cruising.  Two 'big ticket' items still on the list were an outboard motor and a hydro generator.  We also had the rig inspected.

Our old Honda 2.3hp 4-stroke did good service.  We bought it in Darwin in early 2012 and it served us well through SE Asia, back to Fremantle and all the way to the UK.  In the UK it was only used intermittently and it gradually became less and less reliable.  Eventually we gave it away for scrap.

We wanted to replace the Honda with an electric outboard motor.  For a while we considered an ePropulsion from China.  Their regenerative capability looked nice and would be compelling if it supported house battery charging.  We chose a German Torqeedo Travel 1103 CS.

The battery arrived with about half-charge.  We used the 100W mains charger which took several hours to get to 90%  We then tried the 50W 12V charger which took a few more hours to finish the job.
With the battery charged we assembled the system.  The battery slots onto the motor and is locked with an orange plastic bar.  The tiller is then slotted in; battery then tiller cables are connected; the magnetic kill switch is attached; and the motor is ready to be turned on.  The display shows battery level, range, GPS speed over ground and power level.

We needed to figure out how to mount a hydro generator clear of the WindPilot vane gear.  There is no room forward of the WindPilot's water vane.
We decided to fit an outboard motor bracket.  This would locate the hydro generator aft of the water vane with the bracket lowered, and allow easy access when the bracket was raised.  We'd also be able to mount the Torqeedo for more easy transfer between Zen Again and the dinghy when not on long passages.  And we could use the Torqeedo to (slowly) motor Zen Again in case of main engine failure.
To mount the bracket we needed to account for Zen Again's raked and curved transom.  We cut a set of marine ply boards to size, epoxied them together, cut diagonally to the rough shape, then rasped/sanded to finish.

The bracket is securely bolted to the transom.  The outboard fits nicely on the bracket.  With the bracket raised and nothing mounted on it the WindPilot water vane can do a full 360 unimpeded.  With the bracket lowered there's plenty of room for the vane to move through its normal arc, and the SailingGen will be well clear of it.  Phew!
We did a short marina 'sea trial' of the Torqeedo.  It is almost silent and has plenty of power for our little 2.3m inflatable tender.  Might even get on the plane with a longer kill switch cord.  The kill cord is important since the throttle twist-grip doesn't return to idle when released.  The motor shaft is an excellent rudder.  Lots of prop-walk going astern which is easily accounted for.
After about 20 minutes use including several 'flat out' trials we still had 92% battery charge.  Love it!

We chose the German SailnSea system called SailingGen.  You can find the manual here. and a youtube video here.  Armin the company owner has been very helpful.  We've ordered a unit and it will be shipped to rendezvous with us in the EU.  That will avoid any post-Brexit shipping debacle. 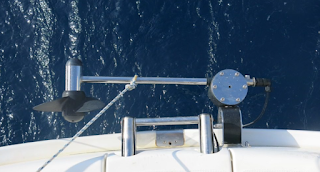 The SailingGen includes a regulator and display/control unit.  The regulator is also controllable via bluetooth, currently only from Android devices.

The SailingGen will give us power 24/7 at sea.  Our solar panels give us a lot of power, but only during the day of course, and very little under heavy cloud.  With both hydro and solar we should keep our batteries full at sea and not need to run the main engine.  That'll be nice.

We had the rig inspected by Gosport-based XW Rigging.  I have a theory that every rigger will always find at least one issue with any rig.  So it was this time.  One of our lower shrouds was exiting its swage at an angle.  We'd noticed it previously but not taken any action.  XW convinced us that was a poor decision, particularly since we're resuming bluewater cruising.
XW replaced the suspect shroud and its pair within a couple of days.  We're keeping the old pair for spares.  I then climbed the rig to do my own pre-departure check.
Now we're waiting for the approaching 'big chill' to pass over before we depart Gosport.  The Met Office is saying it'll be January-like weather for several days.
Posted by Mike Reynolds at 19:05