This is a technical post.  This week we installed a new radar system on Zen Again.  When we bought the boat she had a 1990s Furuno radar.  At our major refit in Thailand it was on its last legs so we disposed of it.

During our voyage from Australia to the UK we had several incidents where we were caught out by squalls - either at night or in overcast conditions.  We resolved to fit a radar system before resuming bluewater cruising.  Its primary role would be detecting the heavy rain usually associated with bad squalls.

When we started looking for a new radar our starting point was Furuno since we like their radars.  The 1st Watch DRS4W system was particularly interesting since it provides a WiFi access point instead of a fixed display.  This fitted our philosophy as described recently here, using iPads for chartplotting and real-time and trend data display.

We had Marine Tech rivet the ScanStrut mount to the mast.  They had a much bigger rivet gun than ours!  Mounting the radar itself was simple - just remove the four bolts, place the radar and refit the bolts.  No need to open the radome.
I then had the fun job of running the power cable.  That involved moving two halyards to free up a halyard slot in the mast at just the right height.  Drilled a hole at the base of the mast for the cable to exit.  Dropping and fishing out a messenger line proved very easy.  Pulling through the cable needed two people to save time.  Then feeding the cable through the boat to the navstation's circuit breakers was tedious but simple.
With the power cable connected via a 5A circuit breaker we were ready to test.  Power on!  We connected an iPad to the WiFi access point and started up the DRS4W Marine Radar app.  It found the radar and displayed its Preheating page, showing that the radar was coming to life.
With the two minute preheating of the magnetron complete the STBY page is displayed.  This shows the total On and Tx times for the unit.  We could then tap the Tx button and the radar picture appeared.  The sweep period is about 2.5 seconds.  The user interface is very simple with menu items accessed via the < on-screen button.
The image below shows rain setup which is one of several setup screens.  Hopefully rain setup will work well for us.
The image below shows us in the pen in Gosport.  The 20m deadband around the boat is clear.  The linear rows and columns aft and to port are boats in the marina.  The big return on our port quarter is a tanker berthed immediately outside the marina.  Ahead of us is the shore with boats lined up on the hard.

Next we tried connecting an iPhone.  Very simple.  Up to two devices can be connected simultaneously. User input on either controls the display on both.  On the iPhone the menus are accessed by tapping the screen.

The DRS4W supports offsetting your boat in any direction, activated by simply dragging the display.  It also supports a configurable guard zone.  The image below shows the idea.

We were very pleased by the low power usage of the system.  Much lower than our old system.  The DRS4W draws 0.8A in standby and 1.6A when transmitting.

Posted by Mike Reynolds at 23:51 No comments:

This is a technical post.  It updates one of our most popular posts "WinLink Setup with Icom IC-7300".

We'll describe how we setup our IC-7300 HF/SSB to use the new VARA modem protocol on WinLink.  VARA offers faster data communication than the older ARDOP and WinMor protocols.  One does have to pay the VARA author US$69 to use the high data rates.

VARA must be downloaded and installed separately.  Download it here.  We installed it at C:\apps\VARA but the default is C:\VARA.

Initially 'Tuning' using the VARA SoundCard drive level tool caused interference in the USB cable which confused the IC-7300.  Once we realised what was happening it was simple to re-run the USB cable via a quieter path (it was already fitted with RF chokes) and set the volume.  We settled on a lower volume than the graphic in the tool recommends.

Overall our three transmit volume levels are -25dB in VARA, 100% in the Windows Volume Mixer and 50W IC-7300 transmit power.  The first two are shown in the image above.
The screenshot below shows our IC-7300 transmitting during a VARA session.  It's at a lower level than recommended but is working well.
Once setup we've found VARA very easy to use.  We'll use WinLink to obtain mid-ocean weather forecasts by downloading SailDocs GRIB files.  So that's what we tested.
We carried out initial tests on 20m (14MHz Amateur Band) to stations 600nm away in Switzerland and 1000nm away in Sweden.  Zen Again was in her pen at Premier Gosport Marina, which is far from optimal since we're surrounded by other yacht masts.
The screenshot below shows us communicating with S50ARO in Sweden.  The 100% Windows Volume Mixer level is visible.  It is labelled VARA, while in the drive level tool the label is SoundCard.

The screenshot below shows the session terminating.  The transcript shows 1315 bytes downloaded in 13 seconds.  We were impressed at the download speed given the poor circumstances.

It's interesting that VARA can exceed 20kBytes/Minute in reasonable conditions.  That's faster than Pactor3 or Iridium Go!.

We expect to use HF/SSB WinLink as a backup to an Iridium Go!.  One reason for this is we like PredictWind forecasts and routing.  PredictWind data can't be carried over WinLink since it is commercial.

Posted by Mike Reynolds at 23:00 No comments:

Since returning from our cruise of the SW coast we've been tackling various maintenance tasks.  Here's what we've been up to...

During the cruise our fridge became unreliable and then stopped working.  After 5+ years of 24/7 operation without servicing we weren't surprised.  We got by without the fridge for several weeks.

Back in Gosport we contacted RJ Wells and Rob visited the following day.  Rob regassed the system and we swapped out the failed Coastal Climate temperature controller for the original Frigoboat thermostat controller which we'd had kept as a spare.  That got the system running very nicely.

Ever since first mounting our Airmar 220WX weather station we've known it really ought to be elevated out of turbulence.  It's now clear of the goal post and is giving much more accurate wind data.

For some time we've been using our old cockpit mounted Garmin GPSmap451 to display data only.  We rarely use its charts.  Earlier this year we fitted iPad mounts in the cockpit.  And recently we added the SignalK-based realtime data app WilhelmSK to the chartplotter app iNavX.  The next step was to remove the chartplotter and rearrange the cockpit instruments.
The new arrangement mounts the primary autopilot controller, the VHF handset, the VHF speaker and a USB power outlet.  It's neat and tidy.  Having the VHF on deck will be much more convenient, and also quieter for the off-watch below.

With the 220WX giving us good wind data we could feed the data to the two autopilots.  This will allow them to 'steer to wind'.  The work involved setting up the SignalK system to output NMEA0183 data for  connection to the Raymarine SPX5 course controllers.  While playing with the autopilots we also re-aligned their compasses.

We've been slowly improving our new SignalK system.  We're learning about Node-Red, InfluxDB and Grafana so we can record and display exactly what we want.  We use Node-Red to calculate Set, Drift and to reformat position from degrees to degrees and minutes.

We normally display Grafana dashboards on our Macbook in the navstation.  We can also display them on the HDMI monitor in the saloon and our iPadas...
Here's our new electronics system diagram... 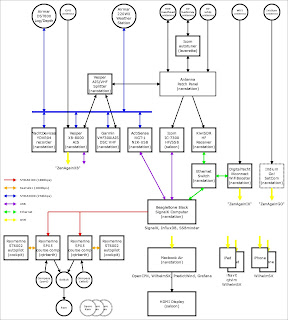 Trust all's well where you are!

Posted by Mike Reynolds at 15:11 No comments: